You are here: Home / Archives for Alberta 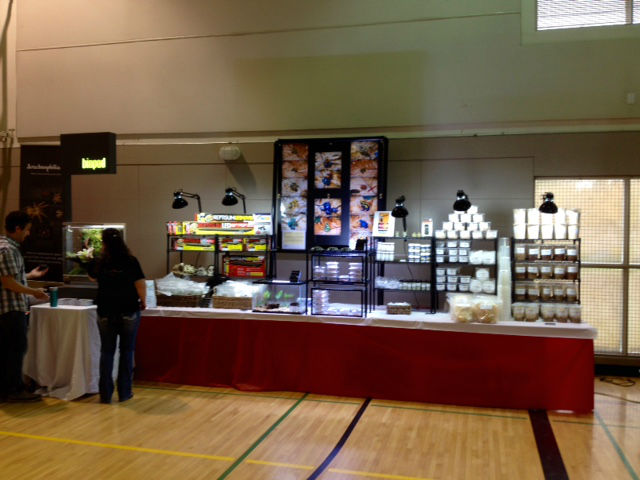 Jungle Jewel Exotics is proud to be attending the Edmonton Reptile Expo for the very 1st time.  We will be bringing a selection of Captive Bred Dart frogs, as well as several prebuilt Living Vivarium’s. If you’re looking to create a Bioactive Vivarium for your critters, stop by our booth to get your soil bugs!!! Jungle Jewel Exotics is Alberta’s best place to get Springtails, Isopods and Flightless Fruit Flies. We will also be introducing Jungle Jewels Exotics very own Springtail food and Fruit Fly Media plus all the supplies you’ll need to culture your own bugs. This includes 32oz Deli Cups, Poly Fabric Lids Excelsior, Mite Masher, Dendrocare Vitamin Supplements and Oak Leaves. Maybe you already own a terrarium or vivarium and want to create your very own living piece of art. Jungle Jewel Exotics has everything you’ll need to create your own Living Vivarium. We will be bringing our very own custom blended Vivarium Jungle Soil, Background mix, and LECA to make your false bottom, Cork Rounds, Malaysian Drift Wood and Wacky Wood

Join Jungle Jewel Exotics at the 2015 fall Edmonton Reptile Expo on Oct 3-4. Everything takes place in the Sands Hotel located at 12340 Fort Road Edmonton. Doors are open 10am to 5 pm on Saturday October 3rd and again on Sunday October 4th from 11am to 4pm. 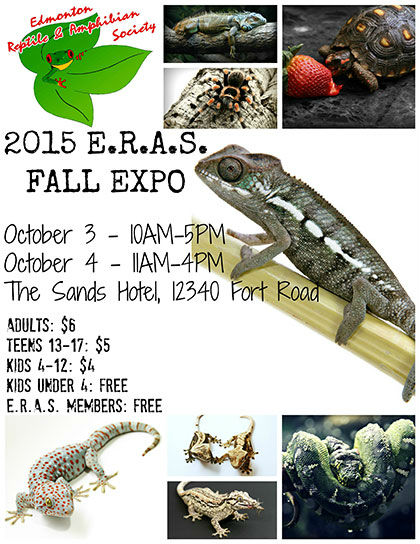 I am elated to bring you the following update regarding the Dart Frog Ban in Alberta. Below is an email that was issued on August 21 2015 by Dave Stepnisky, the Director of Fish and Wildlife Habitat Policy. In it he states that the there will be an amendment to the Wildlife Regulation in Alberta coming  (no timetable is give though) Dave does go on to say that  only the Genus Phyllobates will a ‘Controlled Animal’ which is the way it was prior to the last change to the legislation. This is very positive news, and we couldn’t be happier.

Subject: Request for progress update on Wildlife Regulation as it relates to the possession of Poison Arrow Frogs in Alberta

This email is to follow-up on your phone call to my office and our recent discussions regarding the review of and amendments to the Wildlife Regulation, as it relates to the possession of Poison Arrow Frogs in Alberta.  Travis Ripley (the Executive Director of Fish and Wildlife Policy) is currently out of the office and on Annual Leave until August 30th, but he mentioned that you may be in contact with us during his absence.  While I can confirm that we are working on a proposed amendment to the Wildlife Regulation which would identify only the Genus Phyllobates as a ‘Controlled Animal’, I, unfortunately, cannot provide you with a timetable for the completion of this work.

Further, while the proposed amendment to the Wildlife Regulation would see only the Genus Phyllobates listed as a Controlled Animal for the purposes of Alberta’s legislation, it is nevertheless important to note that the Family Dendrobatidae remains listed under both the “Convention on International Trade in Endangered Species” (CITES) and the Federal Government’s “Wild Animal and Plant Protection and Regulation of International Trade Act” (WAPRITA).  Any changes which are made to Alberta’s Wildlife Regulation will not relieve you of your requirements to comply with applicable federal legislation.